Videoconferencing Lectures: A Guide to the Equipment and Operations 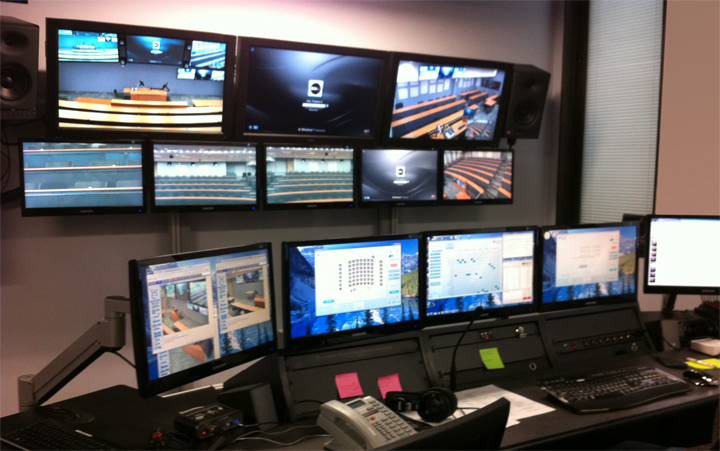 The videoconference will already be live when you arrive to the room for your lecture; you’ll see (on the screens) and hear students in the room at the far site, and they’ll be able to see and hear you on the screens in their room. Your presentation will be loaded and ready to go on the screens.

There may or may not be a technician in the lecture room, but the rooms are monitored closely and a technician can help you remotely if you require assistance, or come into the room as necessary. If you have not lectured before in these rooms, a technician will come into the room to help with the microphones and answer any questions you may have. There is not usually enough time between lectures to provide a complete training session, so please arrange for this before you arrive for your first lecture.

Each lecture will be monitored from control rooms in both Discovery Commons (St. George) Mississauga, and the monitoring technicians will be on top of any issue that arises. 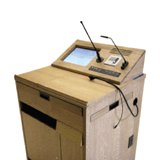 What is it? It's the standard lectern found across all of the large lecture rooms at U of T, with a few differences.

Your presentation for any videoconferenced lectures will already be loaded, displayed and ready to go.

You won’t be signing in; technicians will have done that already.

Unfamiliar with some of the terminology? See the Glossary of Lecture Videoconferencing Terms

About the Lecturer Mics

What are they? They are the tools that allow your voice to be heard at the connected site in the other city (Toronto or Mississauga), and to be amplified throughout the room in which you are teaching.

You’ll have the choice of using a wireless lapel mic, which allows you walk around as you lecture, and the fixed lectern mic (this will already be on). If you’re using the lapel mic, position it on your clothing about 4” (10cm) below  your chin and ensure there is nothing rubbing against it or on top of it (eg: a jacket collar or scarf).  You'll need to turn the lapel mic on; a technician will help if necessary.

Important: if you use only the lectern mic and not the lapel mic, you must stay at the lectern when you speak, or students at the connected site will not be able to hear you.

What are they? They are the methods you can use to communicate to technicians that you require support. 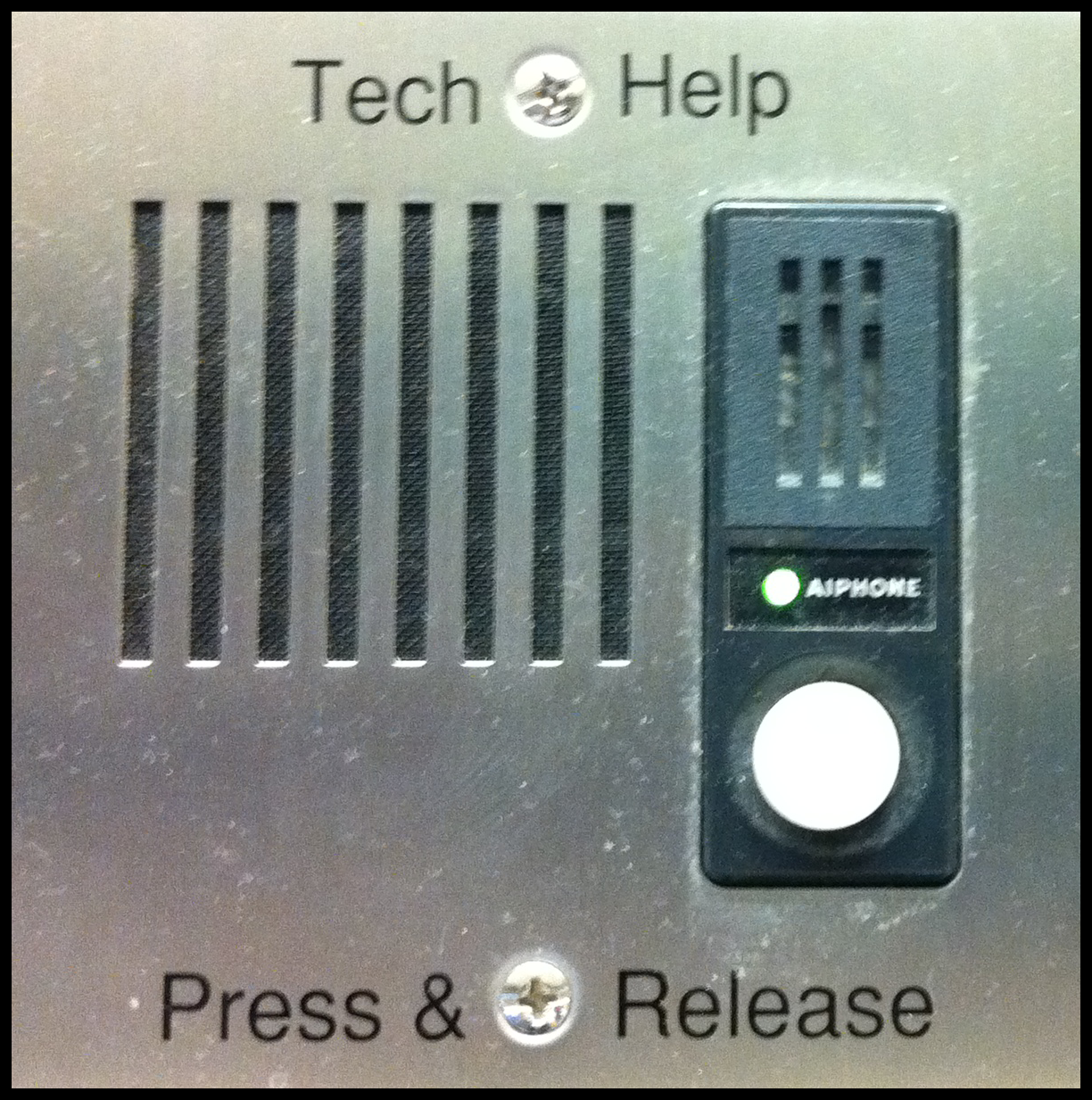 If you need assisstance, speak into one of the microphones and address the technician, or use the lectern Help intercom.

When not in a videoconferenced lecture, the Help intercom connects to general AV classroom support, which manages the AV in all of the campus classrooms.

About the SMART Monitor 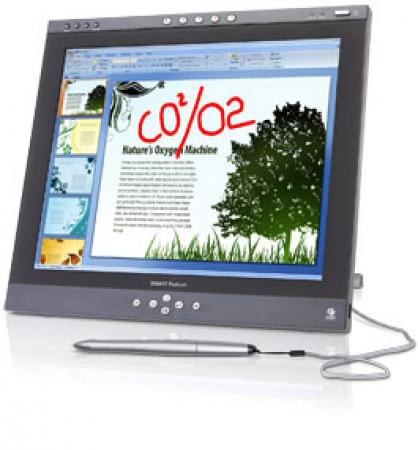 What is it? It is the main interface for you to interact with the PC, including your Powerpoint (to advance slides, open a website, etc).

This is situated to the side of the lectern.

Using the actual blackboard is discouraged during a videoconference because the cameras won’t successfully display the blackboard to the other site. The SMART monitor is the substitute. You can annotate your Powerpoints, websites, images, or draw or write on blank screens. The pen is held in a clip at the back of the unit, near the top. To use the pen, reach over the unit and unclip it; use it to tap one of the colours on the on-screen menu and write on the screen.

About the Touch Panel 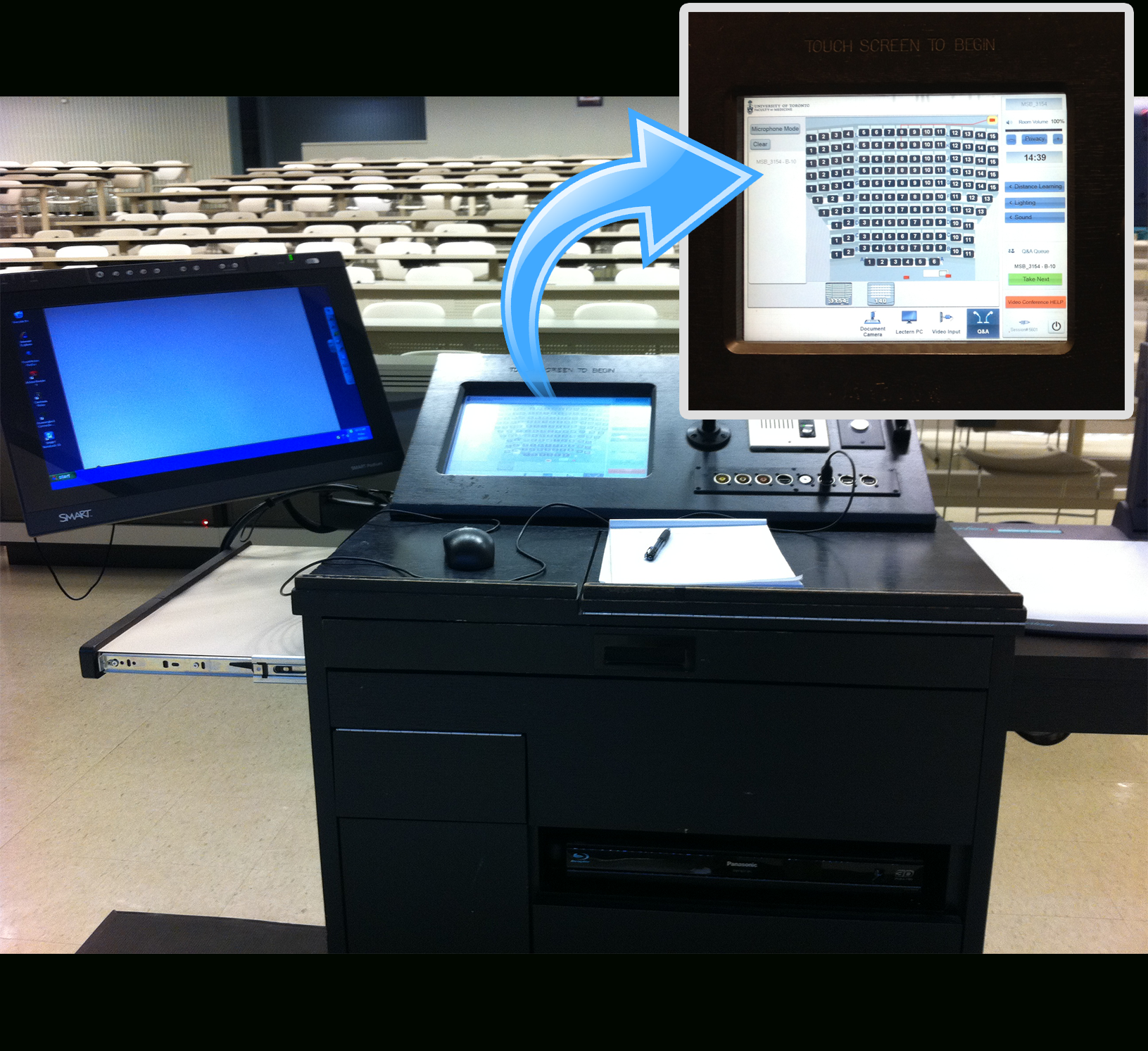 What is it? It is a touch-panel interface to control the equipment in the room, and is situated in the lectern.

The interface is similar to the standard interface of the other rooms on campus, but this one controls several other pieces of equipment, including the videoconference connection.

Everything on the touch panel is replicated at both control rooms (in Mississauga and in the MSB) and will be controlled from there during a videoconferenced lecture.

You may see that there is some activity on this interface that you are not controlling; do not respond to pop-up boxes that appear—technicians will do this from the control room.

You likely will never need to use this interface if you don’t want to.

About the Lecturer Cameras

There are two cameras facing you at the lectern: 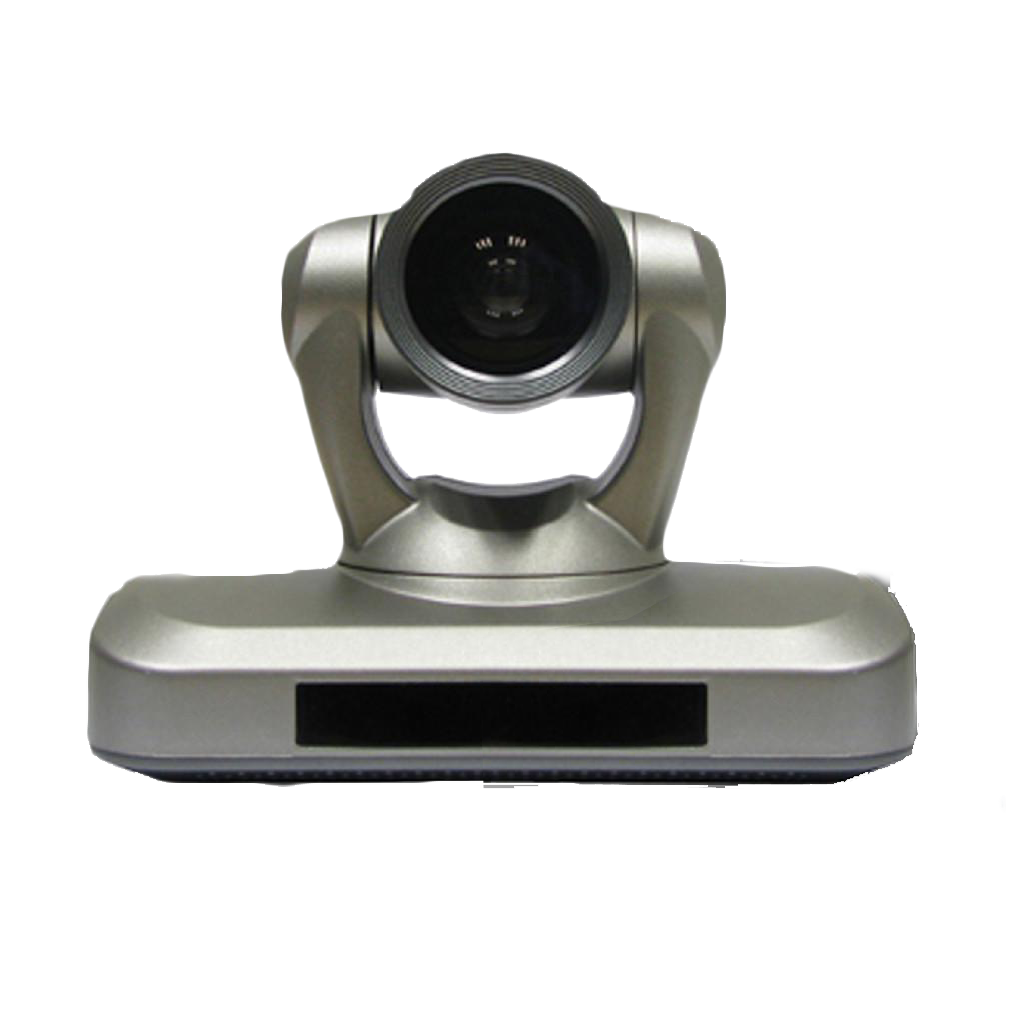 Important: To remain visible to students at the far site (those not in the room with you), please stay at the lowest level and don't go to extreme sides of the room.

About the Student Cameras

What are they? They are the cameras that allow students and presenters to see the students at the other site.

There are three cameras facing the students in each room.

About the Projector Screens

What are they? They are three large screens for the students in the room. 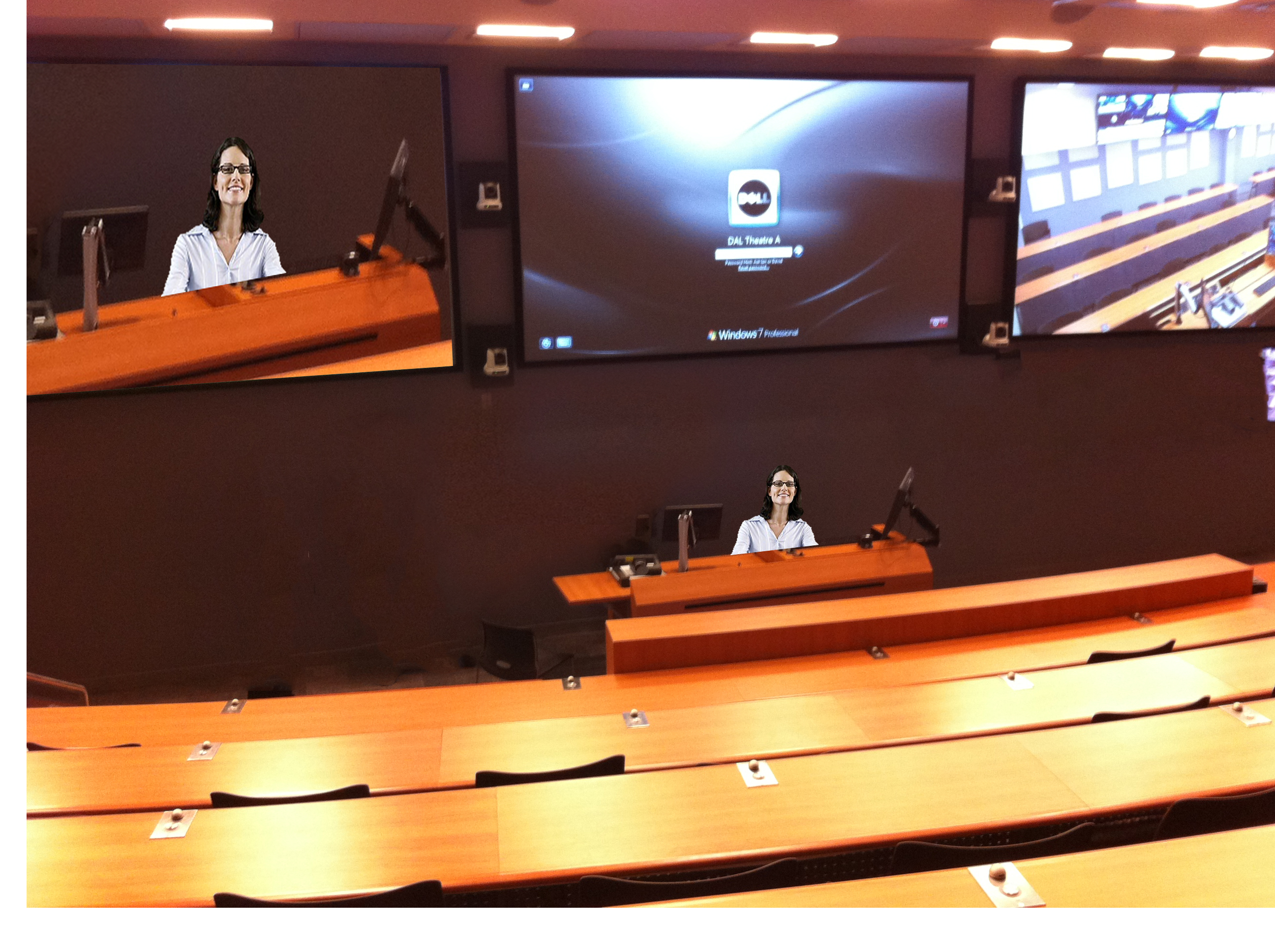 When you are facing the students in the lecture room, the screens behind you will display the following:

When a student is speaking (i.e., when their mic is live), that student will be shown in a close shot on the right monitor at the far site.

At their own site, they will see the wide shot of the far site room with a small PIP (picture-in picture) of themselves. (This is because it’s somewhat disconcerting to see a large close shot of one’s self.)

About the Confidence Monitors 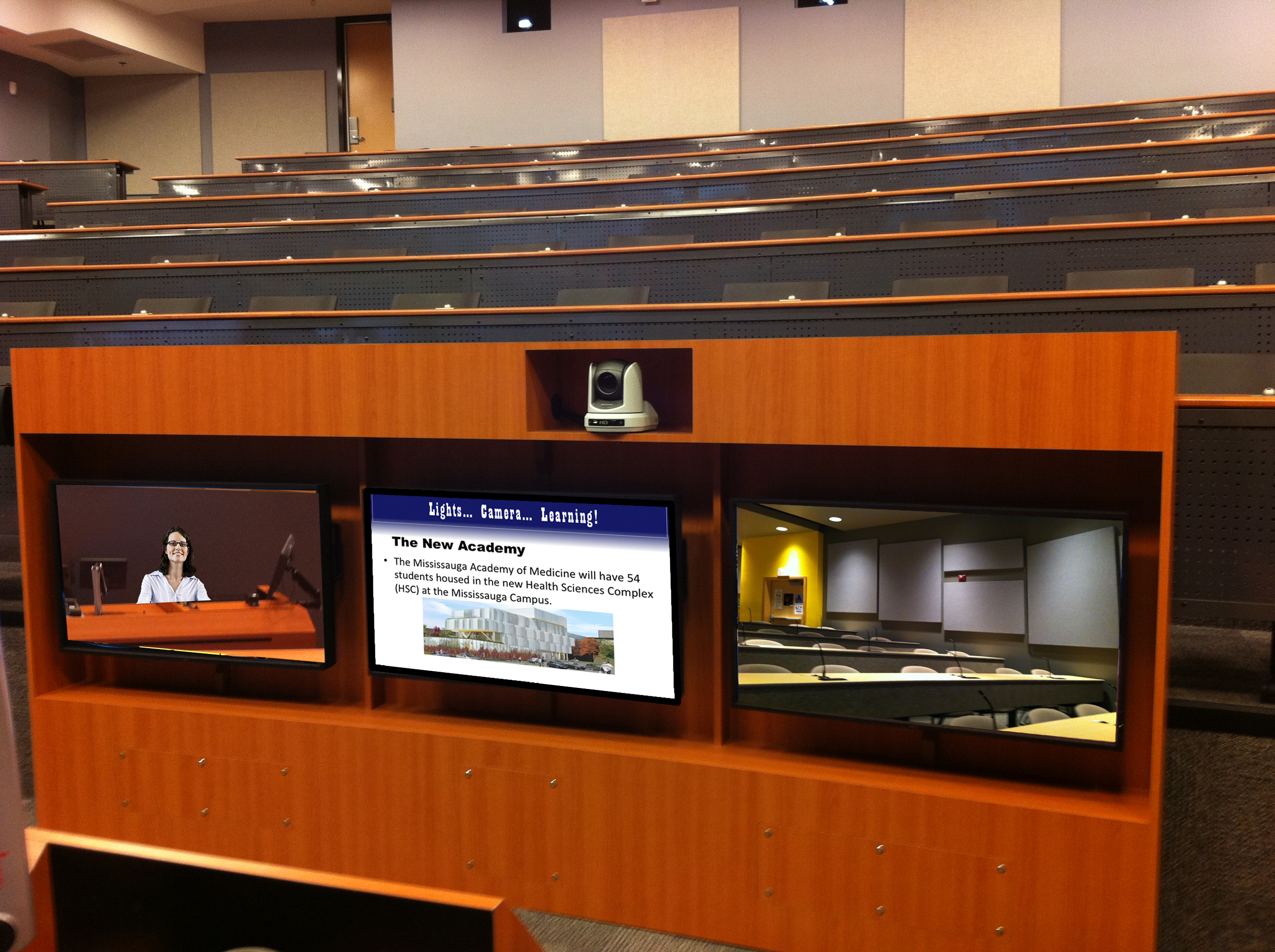 What are they? They are 3 monitors facing you that show exactly what's on the large screens that the students see, so you can see what they see without turning around.

They are in a cabinet on the floor in front of you as you're facing the students, and they display:

What are they? They are the tools that allow a student's voice to be heard at the connected site in the other city (Toronto or Mississauga), and to be amplified throughout the room where they are located.

Important: students at both sites need to use the mics at all times when they’re communicating with you, even if you’re able to hear them locally without their mic, in order that students at the far site can hear them

There are different modes for the microphones, and the mode is changed by a technician at the lecturer's request. The default mode is the first listed below, Request to Speak. Let us know in advance if you want another setting for your lecture.

Desription of the student microphone modes :

What is it? It is the method by which you turn on student microphones, allowing students to be heard by those at both the Toronto and Mississauga sites.

There are several ways of managing the mic queue, depending on which mode is active. 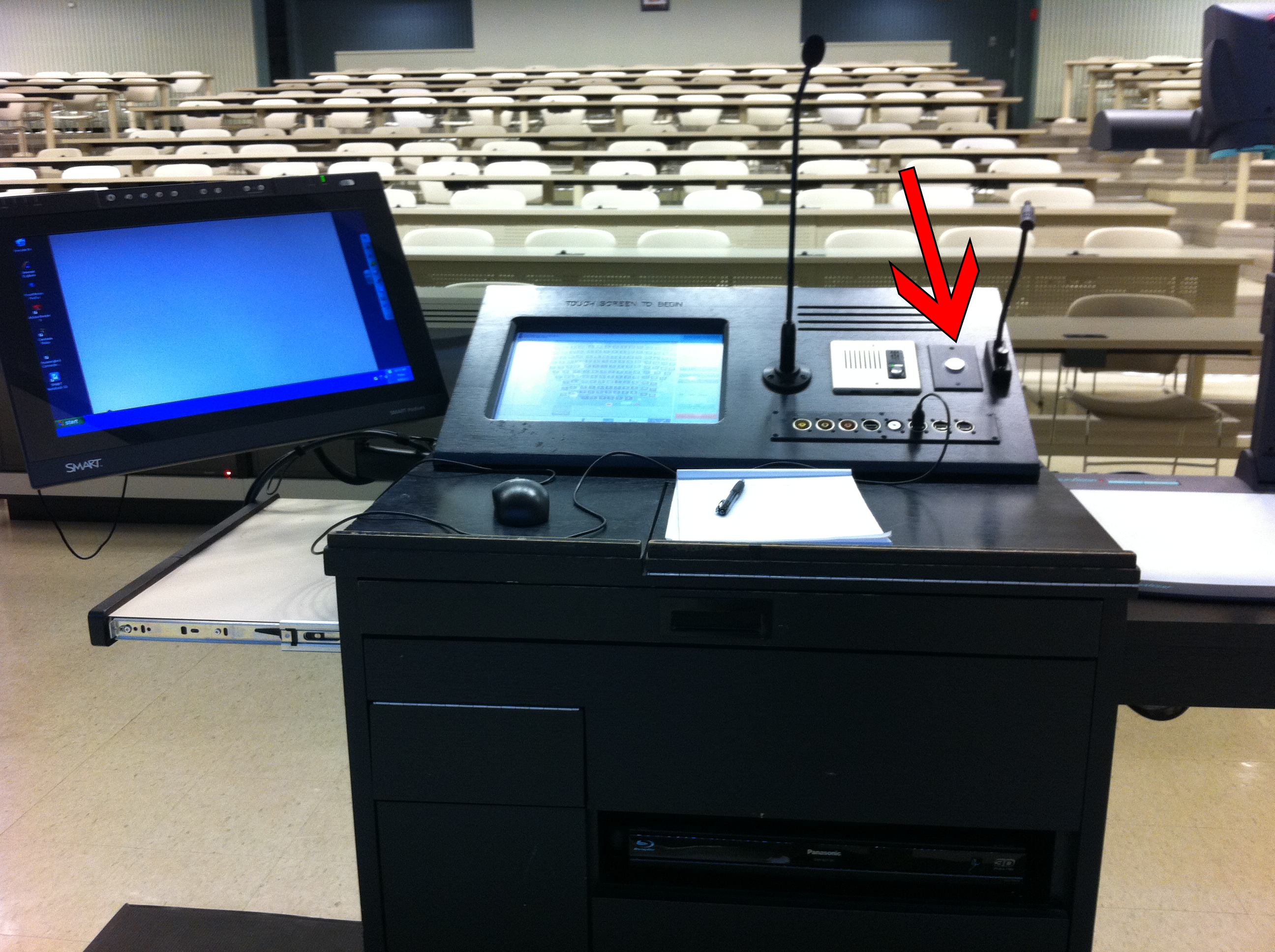 If a student at either site presses their mic button, your primary indicators will be: 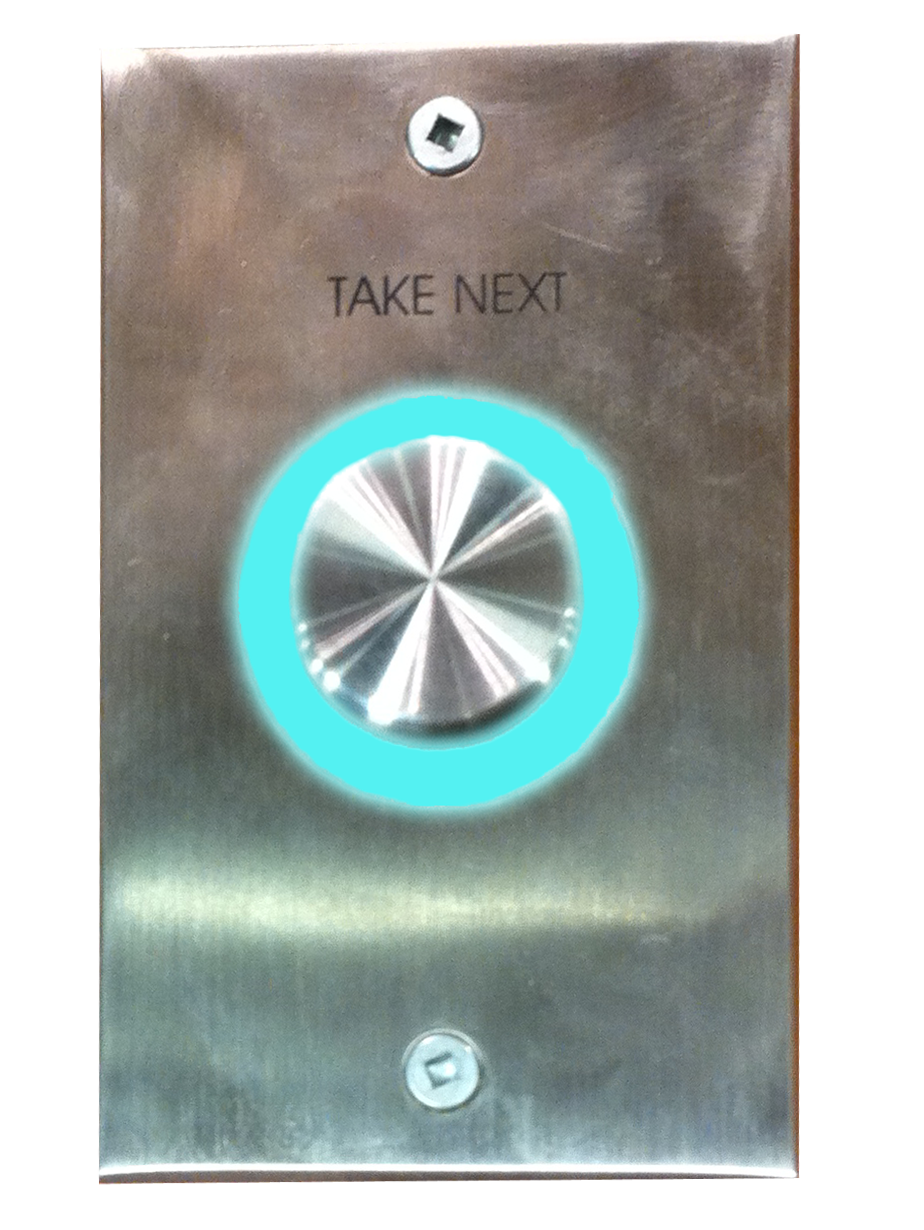 To accept a student’s request to speak (that is, to turn on their mic), do the following:

Other indicators, that you may wish to use if you are more experienced with the system, are:

To accept a student’s request to speak (that is, to turn on their mic), do any of the following:

Students will be given instructions on operating the mics during orientation week or their first videoconferenced class.

Students operate the mics as follows:

The student microphones have a lighted blue ring around their buttons; the light indicator displays as follows:

What is it? It is the lighting control that allow you to turn on and turn off the lights in the videoconference-connected rooms.

There are three lighting modes that can be used for videoconferenced lectures:

These are usually set from the control room, but can also be accessed from the touch panel on the lectern.

Videoconferencing requires a higher light level than would normally be set in a lecture room. The lights can be lowered during the showing of a video (Low-lite Theater) or during the presentation, if there is no interaction with students.